In many of the major trading centres in Scandinavia large graveyards where thousands of people were buried were established. In Birka on the island of Björkö in Lake Mälaren there are traces of almost 3,000 burial mounds. More than one person was buried in most mounds. That means that the number of people laid to rest on the island may approach 5,000.

Those who are buried in the graveyard were not only local inhabitants. The trading centre probably also functioned as a type of necropolis, a multicultural environment where it was desirable to be buried.

Scientific analyses of remains can tell us about whether the buried person was born in the local area or had moved to Birka from elsewhere. Over 40 analyses measuring the contents of lead, oxygen and strontium deposited in tooth enamel and the roots of teeth have been carried out on Birka. The element strontium occurs naturally in the soil and we imbibe it through food. The concentration of the substance varies between different geographical areas. In this way the result of the analysis can reveal where an individual was born and give an idea of the extent of people’s mobility throughout their lives.

Archaeologists previously thought graves with cremated bones contained natives of Birka, while outsiders would have been buried intact in the earth. But the new tests reveal that less than half of the people analysed were born locally. The majority were immigrants, and the results are the same for cremated and non-cremated individuals.

A study of almost 40 people buried in Sigtuna – halfway between Birka and Old Uppsala – somewhat later during the 11th century produced similar results. The Sigtuna study only looked at people who were buried without cremation; around half of them were immigrants and of these the majority were women.

The child from Birka

If the tooth enamel from a dead person is analysed it is possible to get a picture of the person’s patterns of movement. One example is the child from Birka. The 20 or so strontium samples from a milk tooth which was analysed tell us where she was born and that the first nine months of her life involved constant travel.

During this short time the child moved to and from Birka twice. The first journey was immediately after she was born somewhere in Mälardalen. Her stay in Birka was short-lived. After just two weeks she was back in the same area she came from.

She remained there for a few months. But analyses of the samples suggest that, still a baby, she was soon on her way back to Birka.

She was about five years old when she died. We know this because the length of her thighbone is the same as in other children of that age, and because the permanent front teeth in the lower jaw had not broken through. Where she stayed and what places she went to during the rest of her short life is not possible to say from the samples from her teeth. Probably it continued in the same way, with regular journeys between her home village and Birka or another trading centre.

She was buried in Birka in a dress which links her to the role of a well-to-do woman. Like many other children, she was dressed like an adult. Her blouse or shirt was held together at the neck with a small, round, gilded brooch, ornamented in the Scandinavian style known as Borre style. Over her chest hung a set of silver and gold-leafed beads and in a belt or band around her waist she wore an iron knife and a bone needle case.

Of the almost 50 child graves investigated in Birka – the total number of graves has been estimated at between 350 and 400 – the remains of the child in grave Bj 463 are the most complete and well preserved. This probably contributed to the decision in the 1870s to move the whole grave to the Swedish History Museum, with the objects and the skeleton lying just as when they were found in the earth. 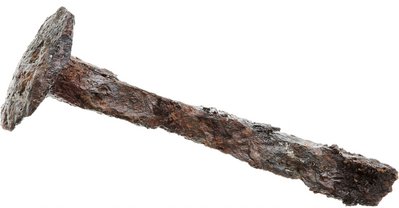 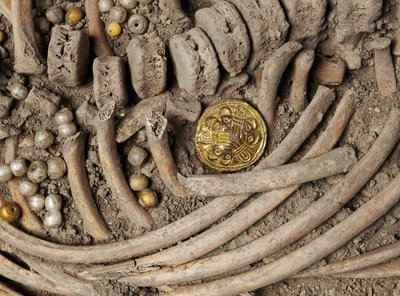 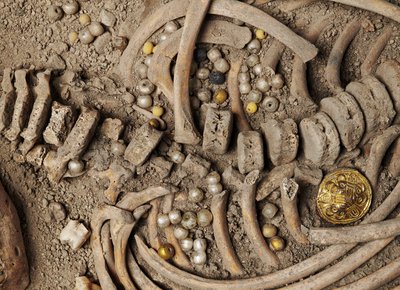