Weapons were important for those who would go out on a “Viking”. The sword was the most prestigious weapon. They were often designed with beauty in mind.

High quality sword blades and spears might be damasked, that is, decorated with a number of melded layers of iron and steel of different quality. When the blade was polished an intricate design would appear. The sword hilt had details in precious metal or bronze.

In the case of the spear, it was mainly the handle that was decorated, with a relief pattern directly in the iron or with ”tauschering”, a kind of metal inlay. This involved hammering thin threads of silver, copper or brass in flutes into the surface. The thread created geometric patterns. Another method was to cover the entire surface with hammered silver and to engrave inlays which were filled with a black substance, niello. Most of the weapons were not so lavish. The main thing was that they did their job in battle.

Norsemen enlisted with the Emperor

In the middle of the 9th century Norsemen enlisted in the Byzantine emperor’s army, just as their ancestors had worked as mercenaries in the Roman army several hundred years before. At the end of the 10th century the Emperor created a bodyguard corps, which is usually called the Varangian Guard (from the old Norse word væringi) as there were so many Scandinavians in it. The meaning of the word væringi is disputed but the general theory is that it means ”sworn”.

Væringi appears to have given rise to both the Greek word barangoi, and the Russian varjagi, which both signify Norsemen in one sense or another. The Russian word has in turn been borrowed into Swedish as varjag, which signifies north-eastern Vikings who travelled to the east.

However, the most famous væringi of all was from the west of the Nordic area, Harald Sigurdsson Hardrada, who became King of Norway. According to both west Nordic sagas and Byzantine chronicles Harald successfully fought as an officer in the Varangian Guard in various places. He did that, for almost a decade around the year 1040, in the Greek islands, on Sicily and in the Balkans. Then he returned to Norway to claim power. He fell in the battle of Stamford Bridge in England in 1066. 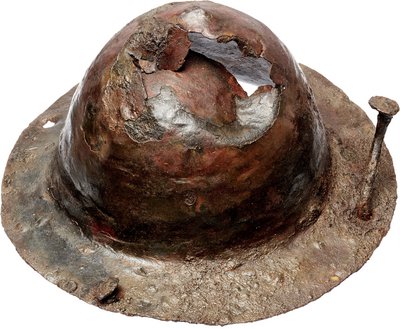