The path to Hel

A third underworld in Old Norse poetry, apart from Folkvang and Valhalla, is Hel. The name means ”the hidden”.

In contrast to the Christian inferno, Hel was a place where it was eternally cold. The path to the underworld, which went ”downward and northward”, is described as ice-covered and slippery. This led to the tradition of ”binding Hel-shoes”, shoes with spikes, onto the deceased. These have been found in many excavated graves.

The ruler of Hel is herself also called Hel. She is “half blue, half the colour of a corpse”. Hel’s realm is guarded by the hellhound Garm, who lives in the cave Gnipahellir at the entrance to the underworld.

Descriptions of who might end up in Hel are contradictory. On the one hand it was said that those who had died a natural death from sickness or old age at home on the farm would go there. On the other hand Odin’s son, Balder, went there after he had been killed by mistake. 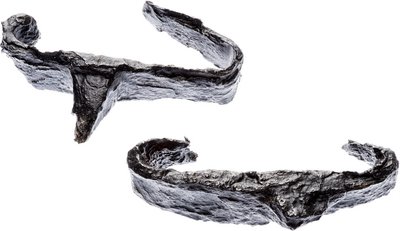