The Scandinavian winters can be long and cold with snow, slippery tracks and ice covered watercourses. Spikes were used for both humans and animals to navigate the slippery surfaces. Grave finds reveal that broken bones were common, and that many of these injuries healed.

For humans the spikes were fixed to a leather strap tied under the shoe. Horses had spikes under the hooves.

There was another device to help people move around. Ice skates were usually made from the metatarsal bone of a cow or a horse. A large number have been found in archaeological excavations in Birka on the island of Björkö in Lake Mälaren. It is difficult to interpret from the finds how the skates were used.

Most are quite small. The average length is only 20 centimetres, which is the equivalent of modern-day Swedish size 31–32. They seem to be for children. Most ice skates lack drilled holes for straps that attach them to the feet. This may mean that the users stood still on them and pushed themselves forward with the help of an ice prod. Or perhaps they were just not finished.

Sources from other historical contexts mention ice-skating as a kind of game or entertainment, rather than as a means of transport. This might have been the case in Birka where there were a lot of children. The question is how much time they had for games and leisure activities. The children joined adult life at an early age, participating in everyday jobs.

One possible job for small and light people may have been to go out on the thin ice of the late winter/early spring to go ice fishing or to work the nets. The sheer number of bone ice skates found in Birka may suggest that this was an important supply of food in the winter. 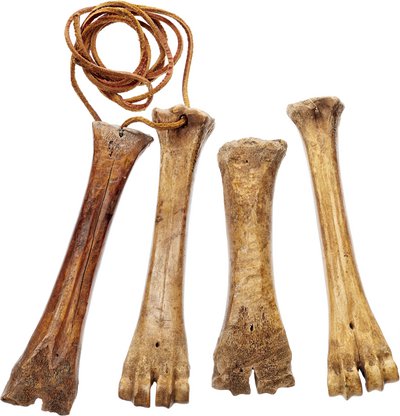